Good morning, everybody. It's Monday and I know it's been a really long time since I actually did a vlog. So I just wanted to explain a little bit why that is and basically, I have been trying to upgrade my equipment to give the best possible quality.

Also to kind of figure out how I kind of want things to work. So I work alone, as a lot of you will know, and basically, what's been happening is I've just been forgetting to pick up a camera and record. So not only that my battery life on my phone was just dying and some of the stuff I make actually takes quite a long time.

So for example, today, I've got a hell of a lot of Welsh, dd gingies. To do, because for those of you that don't know, March, the first is St. David's day in Wales and he's our patron saint. So we kind of dress up in traditional dress, especially the children in schools, adults, not so much. But these gingers have been doing really, really well, because, you know, normal events are just not happening this year, same as last year. So I've got quite a few of those to do today.

So they take the girls, they take about two and a half hours to make six, and I've got seven to eight to do. So I need to get those done, then I've got six Welsh boys to do in the Welsh boy outfit, as well as the Valentine's couples. So it's going to take a little while for me to get everything done today. But I'm gonna try and film as much as I can of the process. And just basically let you see a day in the life of being an Etsy seller, but also being a small business owner that handmade. And so yeah, basically, I'm just gonna leave it at that for now.

I mean, in between when I'm not filming, I'm going to be tidying up my work room, because currently, it is an absolute mess. So I just need to get everything kind of rearranged. So I can actually move around and show you guys a little bit more because where I am at the moment, it isn't actually that big of a room. So once you kind of start working and you get busy and you don't put stuff away straight away, which I am very guilty of, then what tends to happen is you tend to kind of end up working with less and less space, and then you become less productive.

So I'm going to try and improve on that. I'm trying to order some stuff to store stuff on the walls, because, frankly, there isn't enough floor space. So I need to try and think a bit smarter about my storage. So if you do have any suggestions for wall storage, I am ordering some of the IKEA Skadis peg boards for the walls. And I do have a kallax unit behind me. And here let me see it's following me is behind me directly is a kallax box. So I got one of those. And ideally, I'd like to get another one.

It's just whether or not I'll have space. So anyway, I'm going to leave it here guys. I'm going to get started on work and try and do some time lapses of what's happening and get you started on a brand new vlog. So see you soon guys. Let's get busy.

Hey everybody, it's now 12:56pm, and I've actually finished the first set of six Welsh ladies that you saw me making, they're still in the hoop at the moment. So what I'll try to do is I'll try and show you. So I've got to take them out of the hoop now and cut around them, which I'll show you a little bit later, I've got another two that I need to get stitched before I can move on to the gingerbread Welsh boys. So that's going to be the next kind of thing that you'll see is the two Welsh Ladies being made. Then I'll show you as well the rest of today's makes as I go on, and probably in time lapse form, but let's get on with it. Otherwise, I'll be here forever in a day. So thanks very much, and let's get back to it.

Hi everybody, so I've just finished all the Welsh ladies. So the seven Welsh ladies that I had to do and that you've seen me making, and now I'm going to move on to doing the Welsh dudes. I've got six of those to do. Four of them are personalised two are plain. So the next bit of the footage that you're going to see is actually going to be me making the Welsh dudes and hope you enjoy it. So let's get on with it, shall we?

Hi, everybody. So just quick update is now 4:31pm. And I've just finished the six gingerbread Welshmen they look like this, it's following me. So really hard to show you. But yeah, they're basically done now and so I'm going to remove them from the hoop. And I've now got to do three of the Valentine's Day gingerbread couples.

So I'm going to get to work on those, and I'm going to try and record as much as I can of making those, probably not the cutting out of the applique. But I'll try and show you a lot of the stuff on the machine so that you can see kind of how they're made and then it's a case of cutting everything out. Which I will record for you, and then get everything packaged, really so I'm just going to get on with it because we're looking at potentially another hour, two hours worth of stitching, and then maybe an hour's worth of packing. So the quicker I get on with it, the quicker I can get in the house and relax for the evening. So yeah, let's get on with it.

Hi everybody, so it's now 7:19pm. And I've just finished stitching out the last of the orders from the weekend. So I need to now get them all cut, so this was the last one that I did. And so I need to now cut them out and get them all ready to be packaged now so that I can get them into the post tomorrow. And I like to try and get orders done as quickly as possible, even if it does mean working quite late. So I'm going to do a lot of time lapse footage of me cutting these and getting them ready to package so yeah, let's get this done, shall we?


Hey everybody, so it's super late at the moment, it's now actually 25 past nine in the evening, and I've literally just finished packaging the last of the orders. So all my gingerbread people are now going out in these little mailers, and basically because they are plastic free, and 100% recyclable, they use soy inks to print on them. So they're really eco friendly.

And but yeah, it's been a really long day, but I have now cleared all the orders that came in over the weekend. So I'm really, really pleased about that. And, and basically, I'm going to end the the studio vlog here. I'm not sure how much footage I have for you guys, but I hope that you've got to see a typical day in my life. And if you like it, please leave a comment below and let me know and a thumbs up.

Yeah, hopefully you'll stay tuned and let me know what you like whether you'd like to see more of these kind of vlogs or whether you'd like to see more of the sewing, and let me know and if you enjoyed what you've seen, please consider subscribing and ringing the bell to know when my next video goes live. So with that guys, I am going to go to bed. Thanks very much, bye.... 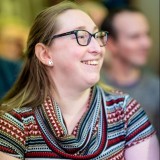 Comments will be approved before showing up.

Studio Vlog 4: Come Work With Me

Top Trends for Kids Fashion in 2021

Be the first to know about upcoming sales and promos. Get a 10% discount coupon when you subscribe!